Light-Emitting Diode (LED) is a semiconductor device that emits light when a current passes through it. When particles carrying electrical current (called electrons and holes) are combined within a semiconductor material, light is produced. Basically, LEDs are small lamp beads, which are easy to install into the circuit. But unlike incandescent lamps, it does not burn filaments, consumes less electricity, and does not generate a lot of heat. They are illuminated only by the movement of electrons in semiconductor materials and have a lifetime as long as standard transistors. The service life of LEDs is thousands of hours longer than that of incandescent bulbs. Because of these advantages, LEDs are one of the most popular technologies for lighting lamps. It is mainly divided into three types, DIP LED, SMD LED, COB LED.

Dual-in-line package (DIP) LED, which the chip inside a hard plastic bulbous head, with 2 straight parallel connecting pins. Although some products still use this design today, its light attenuation and CRI are low, but its efficiency is far less than that of new LED chips. Today, more advanced LED chip styles are available for home, commercial, and industrial use.

Chip-on-board (COB) refers to sticking several chips (usually 9 or more) on an aluminum substrate and packaging them together as a lighting module. This design takes up less space and provides maximum light potential. This technology eliminates the concept of brackets, no electroplating, no-reflow soldering, and no placement process, so the process is reduced by nearly one third and the cost is also saved by one third. You will see them used in loading docks, factories, warehouses, delivery areas, and other industrial applications. COB lights often appear in high-output downlights and track lights. They are also used for street lights, parking lots, and outdoor facilities that require large areas of lighting.

Surface Mounted Device (SMD) LED Chips is the next major development after DIP. Compared with traditional LEDs, the light output generated by SMD is much higher and consumes less power. Compared with DIP LED they have a smaller, flatter design, longer service life, reduced energy consumption by up to 75%, and lower maintenance costs.

In general, according to our many years of experience in the production and sales of led light fixtures, only a small number of DIP LED products currently on the market will use it. Although the acceptance of COB is higher than that of DIP, the most popular is SMD technology.

What is the difference between SMD and COB LED lights？

Advantages of SMD compared to the COB 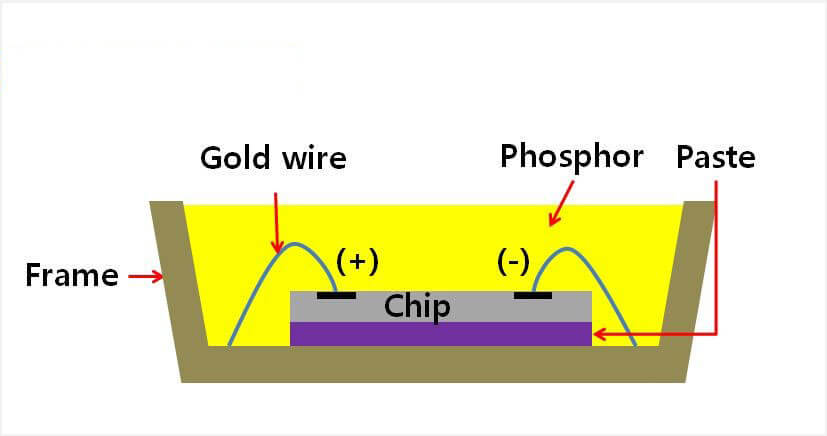 2. Glue
The role of glue cannot be underestimated. Glue plays a role in fixing and protecting. Without glue or poor quality glue, various parts cannot be connected normally.

3. Chip leads
Conductive effect: gold wire>alloy wire>copper wire. In the early days, gold wires were used for chip leads because gold has a high melting point and good ductility. However, the cost of pure gold is too high. While ensuring the conductive effect of the lead wire and reducing the cost, many suppliers have chosen to use alloy wire. However, we do not recommend the use of LED chips with copper wire, because the copper wire has poor conductivity and a lower melting point than gold.

4. Chip
The larger the size, the better the heat dissipation, the smaller the light attenuation, and the longer the life.

5. The utilization rate of the LED chip
If we apply the lamp bead and release its function to 100% ( anything is used to the limit), its life is undoubtedly greatly shortened. Therefore, when designing fixtures, we adhere to the principle of using only 60% of the LED chips, which is conducive to ensuring the quality and life of the entire fixture.

What can the LED chip decide?

What kind of LED chips is XSY Lighting use?

After you have mastered the relevant knowledge of LED chip, you have a deeper understanding of what is a LED and how to choose and judge the LED chip. Only by choosing the right led chips can the lamps get better quality and longer life.

As a manufacturer with 10 years of production and sales experience, XSY Lighting has always been committed to providing customers with the most suitable led fixtures or led lighting solutions. If you need service, please feel free to contact us.